After a long and early morning of running around, as Hakata went on with the daily business of business me and coworkers crashed on our various couches/beds for the day, to return in the afternoon and do some necessary updates.

It’s hard running a website for a festival like Yamakasa, because there’s a really short window of time in which it suddenly becomes very relevant and the information on it has to be as up to date in that time as possible. Photos have to be up, times and news and things have to be up so that we look like we know what we’re doing. So my manager has to not only take lovely photos for the stories on the page, but ALSO write those stories and updates. And keep the Twitter world informed about times and things festival-related. And upload and manage videos and photos and things… basically he has to do fifty things at once where time is completely of the essence.

Why? Because our boss, the other guy who would do stuff like that, is IN the Yamakasa. It’s a tough life!

Luckily my blog is an “impression” blog, so I don’t have to be timely or anything. 🙂

But before I skip back to the 12th for some more photos, as it is now the 15th and Oiyama is over, I’d like to post two tidbits of information:

Not that it’s a competition or anything, but it’s a big point of pride. Nishi still seems to have a few problems, but Kami-Kawabata (the GIANT Kazariyama that gets carried around on a special course, with the retractable top) has pretty much halved its time around the Kushida Loop.  As predicted, Chiyo and Higashi’s serious attitude towards the event showed in their results. The story from our boss is that Higashi sped up after hearing the happy cheers of Chiyo at the goal point ahead of them, meaning they must have gotten an awesome running time. If they hadn’t done that, Chiyo would have been the clear winner.

Good job everybody! For all the bloody, dirtied shoulders and sore eyes this morning the atmosphere was festive, exciting, packed with tourists and yet somehow very local in places too. Having seen the Yamakasa quite a few times now (quite a luxury, judging by some of what I heard around me at Kushida this morning), what really touched me at this event was how local businesses and people in job clothes were out in the street cheering and getting wet, and the crowds of people grabbing spots at 2 or 3 am along their local routes to see the Kakiyama go by.

And everybody cheering everybody, and excitement and stale fundoshi smell in the air. Thanks for a lovely Yamakasa, everybody! 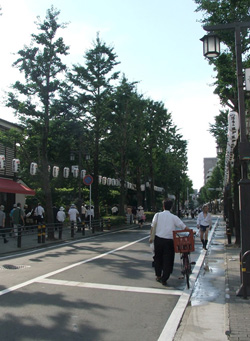 After the event, suddenly all the crowds cleared out.

It’s as if nothing ever happened…. 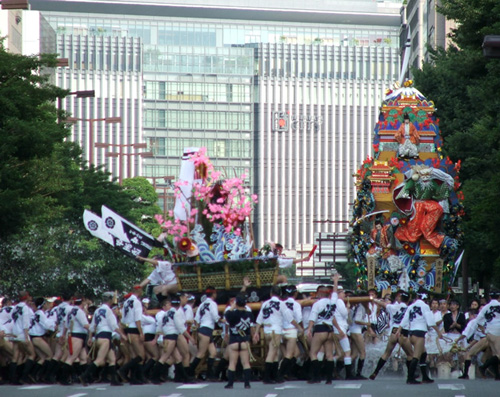 So that’s what this is about! Traffic jam!
It seems Kawabata was waiting for Nakasu to cross. See, the 7 Nagare are running most of the real course on the day, the one that bends all S-like across Hakata City. But Kawabata, being larger and more prone to getting caught in low-lying power lines, and being much heavier, and not belonging to any particular team, does its own little loop course near Kushida Shrine. It’s apparently quite the sight to see it race up the close-roofed Kawabata Arcade at full speed.

So usually the 7 main teams would have finished that part of Taihaku by the time that the Kawabata float showed up. But this time Nakasu seemed to be struggling a bit, and taking its time through the smaller streets. Well.. this IS a practise run, after all.

Disappearing head – progress shots!
I’m loving my GIF maker recently. This was actually a really slow, manual process… so much for a cool expensively automated thing. First the flag went down, then after a few minutes the whole thing rose up an inch (probably getting unhooked) and then got lowered down. I like how the guy stares out from behind the buildings one last time before disappearing….

It all ends! And then, back at HQ… 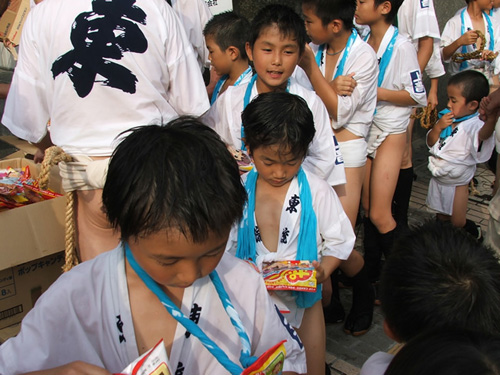 My manager tells me that over the length of the festival, the kids of at least Higashi Nagare will get up to $50 worth of candy and sweets. A sizeable 2-3 bags of chips/popcorn/sweets for every day of running… not a bad hawl, little ones! Plus the props you get all year from your Hakata parents for being a good sport… also, no wonder not many teenagers are in on the action.

So this is it! It was a beautiful sunny day, the crowds weren’t as bad as they would be at some points in the course on the final day, though they were substantial. The daylight was bright so there were lots of nice photos, and I got to see stacks of great stuff.

Verdict: If you want to take a look at what the Yamakasa is all about, come on the day of the Oiyama at 4am-ish and pick a spot, maybe two, at which to see the start and then the progress of the 7 teams of Kakiyama. If you’re really keen on seeing as much of this festival as you can, come along to the practise runs (especially Oiyama Narashi as the roads get closed and it’s got the whole real thing grandeur to it!) and check out the Kakiyama being run through corners, streets small and wide, in and out of the shrine… to really appreciate the energy and dexterity of these guys and see “every bit” of the event you’ll have to go more than once. All the announcements are in Japanese, but with a bit of prior reading you can be quite savvy from the get-go. And I got stopped 3-4 times and asked in English if I understood what the event was about… people in the know are keen to share!

If you REALLY want an inside seat though, grab a guidebook on the 1st and start attending everything on the calendar (or start on the 28th/29th when they’re building the Kazariyama!) and get to know your local team’s base camps. Chat to the guys at the Kazariyama, ask about some of the history behind their own team’s traditions, why they’re participating etc. You can hear some inside stories that won’t be in any publications, and get some inside knowledge about the area too.

If that isn’t close enough for you… shell out the $250ish in donations (at Higashi anyway) and get someone who’s in the event to let you participate! You must be a man, have quite a bit of stamina and want to put up with a lot of yelling and late-night compulsory carousing. I saw a few white folk in amongst the runners on Narashi and the final day, they’re out there! If you really want to give it a try you’re probably welcome to as each team needs manpower.