※This schedule is a date of the year 2011. Yamakasa schedule will change every year. by Yamakasa Navi

I picked up this book at one of the Kazariyama in Kawabata arcade. 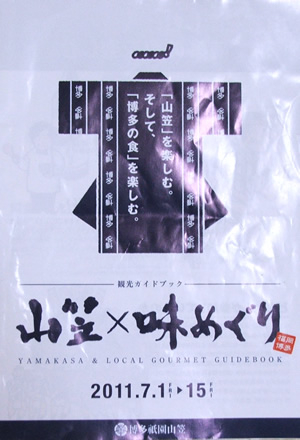 It’s a very handy book! It has schedules, maps and everything you need to know about what’s going on. So I’m going to translate some of the more vital stuff out of it. But so long as you know your way a little bit around Fukuoka (or can line up the map pages with Google Maps) this will still be a handy book for you. If you’re interested in this festival, pick up a copy somewhere!

Okay! Here it goes. Some of the info from the first page:

Yamakasa: A big, highly ornate float that gets carried around. The Hakata Yamakasa festival is named after it.
Yama o Kaku: To carry a Yamakasa around with the strength of people.
Kakiyama: A Yamakasa made to be carried around. (Get it? Yama o Kaku?)
Kazariyama: A Yamakasa made to be displayed. (Kazari: decoration)
Nagare: AKA Stream. Made by Toyotoshi Hideyoshi after he razed and rebuilt Hakata in the early Edo period, they are the ancient districts of Hakata city. They include: Nishi (West), Chiyo, Ebisu, Doi, Daikoku, Higashi (west) and Nakasu. They make up the 7 ‘teams’ that participate in the festival by producing, displaying and eventually racing their Kakiyama through the streets of old Hakata city.
Kakite: A “Carry Hand”; someone who participates in the festival as a Yamakasa carrier. Or a real Participant.

Who Takes Part in the Yamakasa Festival?

Not everyone can run in the Yamakasa festival. You have the right if you were either born and raised on the land of one of the Nagare, or gain special permission from the bosses of that Nagare to participate. Besides being a Kakite though, there are other jobs done by volunteers, some of whom are from beyond the boundaries of the old towns.

Men of all ages are allowed to participate; girls only up until the 3rd or 4th year of primary school. 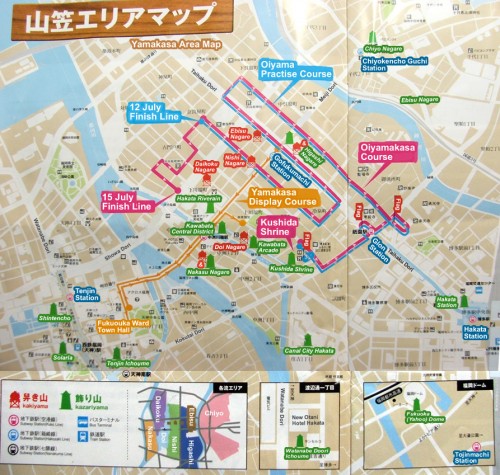 The Nagare and their Kakiyama & Kazariyama

The Kakiyama & Kazariyama are both made new every year, with a design agreed upon by each Nagare’s team. The Kazariyama can reach as much as 9 m in height, and it used to be carried in the Oiyama race until power lines became a problem. Now the Kazariyama is displayed while the smaller Kakiyama is carried. Each Kazariyama has a front and back end. The Front (Omote) must always face towards Kushida Shrine. The back (Miokuri) faces away from the shrine. Each of these have unique themed decorations.

While the Kazariyama stays on display for the full length of the festival, the Kakiyama will have a “parking spot” to which it always returns after being carried in events. The location of Kazariyamas and Kakiyama parking spots is marked out on the map. As the festival has grown in reputation, many organisations with no connection to Hakata city or the historical roots of the festivities have begun to display Kazariyama around town. These include places like Canal City, Tenjin and even the Yahoo Dome Baseball Stadium.  That’s why there’s only a few Kakiyama around focused around the course area, but stacks of Kazariyama everywhere.

The themes have official, kanji-only titles. I’ve roughly paraphrased them to something that kind of makes sense. Where I know the story / figured out what the theme was, I’ve linked articles.

OK, next will be the event schedule and maps for each individual event. PHEW! I’m sure nothing will take as long as all that cross-referencing just did though.

Until then, happy Kazariyama hunting! Are they different to look at now that you know a bit about their stories too?