At the start of my shift after lunch today as the weather warmed up, we ducked outside to watch the first pre-event on the Yamakasa festival calendar:

The Building of the Kazariyama 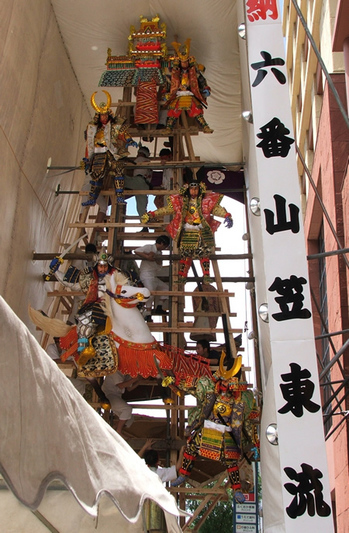 Higashi-Nagare’s Kazariyama! It’s right near our office.
———–
It’s coming up nicely, y
ou can see some guys inside attaching stuff. This is the “front” face, the one that will always point towards the Gods at Kushida Shrine
. It’s called the Omote, or front face. 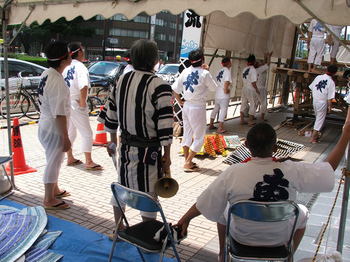 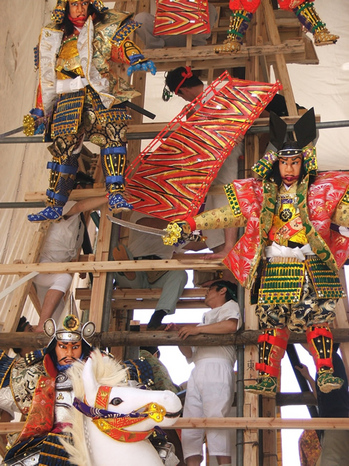 The dollmaker giving directions; the guys inside following them.
———
The Dollmaker, as far as I can tell is responsible for the concept and production of this Kazariyama. He stands with his loudspeakers and gives directions to the men up on the frame.
Interesting Point! As the dollmaker giving directions and the guys in the structure face each other, saying “left” and “right is a really confusing affair. So instead, according to where the Kazariyama stands, he’ll give directions like “Towards Hakozaki!” or “Towards Fukuoka!”. That way both people know which way is which. 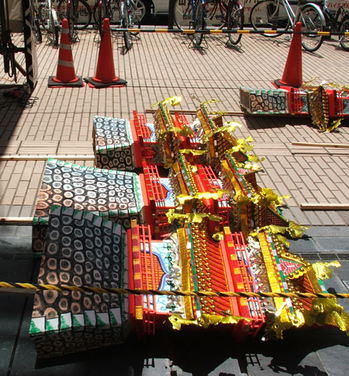 Some bits waiting to be put up.
—————
The job is split up into two days; the larger pieces go up first and the smaller more finicky stuff goes up around them. When done, you shouldn’t be able to see any of the frame. Also the base apparently changes to a “carriable” one, although as far as I thus far know these never get carried. 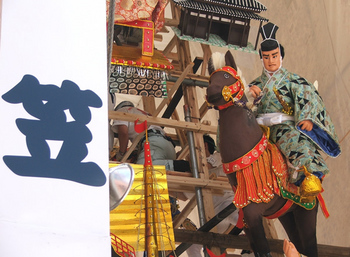 Work progressing from the back.
—————–
This is the back face, or Miokuri... which means farewell. A nicer name than the back end, anyway.
The work will keep going till about 5pm on the first day, then take “until finish” on the second… so that the big reveal will happen on time on the 1st. The participants of each “stream” or team will be working late in to the night on many of the festival days, and be drinking lots of nihonshu to honour the Gods too. It’s hard on you in more ways than one!

Kazariyama in the Kawabata Arcade

The Kawabata Arcade is a long, rooved walkway full of Japanese souvenir shops, traditional kimono and lantern and cloth and paper shops, and then your average arcade shops for cheap/fancy dresses and shoes and things too.

We went there today after the Kushida Shrine and snapped up some shots of their progress too. 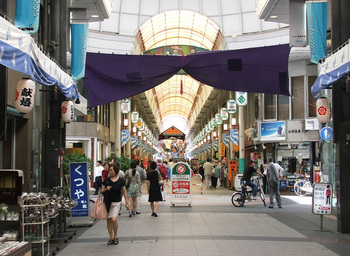 Being very close to the Kushida Shrine, the Kawabata Arcade plays a special role in the Hakata Yamakasa by hosting the Mystery 8th Kakiyama. 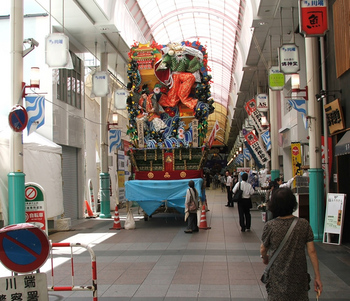 But there are only 7 sub-sections in Hakata…?

If you have learnt anything about the way the Yamakasa is run, you’ll remember these points :
– There are 7 “streams” or subdivisions in old Hakata city
– Each has a Kakiyama that is short and portable. (and by Portable I mean *only* 1 ton…)
– These 7 teams take part in one race that weaves across all of Hakata.
What’s going on here then?

Well, not only did the size and glamour of the old festival floats survive in the Kazariyama that stay put in every township, but they ALSO found a way to run one full-sized Yamakasa through the streets!! The ones that were so big and fancy that not enough manfolk is now available in Hakata city, so grand that they get caught in every power-line! Insane huh? These guys are seriously house-proud about their traditions.

How did they manage with all those powerlines?
The Kawabata Arcade’s covered roof and structure mean there’s about a kilometre of uninterrupted ceiling space in which to carry a full, Kazari-yama-sized mikoshi through. This run will also happen on the 15th, race day, and go from the shrine on its own special path through the arcade. 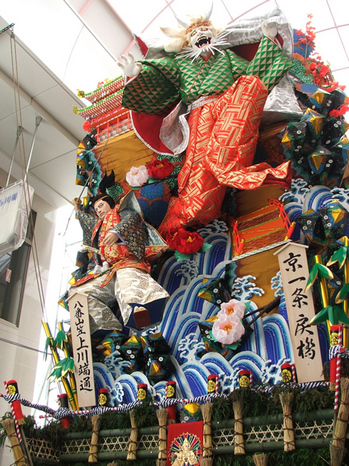 The 8th wonder, Kawabata Arcade’s running Kakiyama, & closeup.
———–
ALSO: It has an EXTENDABLE TOP!! Thought that bit at the top was a bit flat? High-wire electronics mean the full, Kazariyama-sized structure will come out when it can and duck down when it can’t to enable full and optimum Yamakasa enjoyment, at full speed of course.

Did I mention this festival was all about showing each other up? 🙂

Of course running 7 of these through the full course of the festival would be really, really time-consuming and expensive. Why? Because these are built brand new every year.

When you thank a God, you gotta do it right.

Of course, the Kawabata Arcade is a place within one of the “streams” that make up Hakata city. Conversely, it is part of the “Doi Stream”. The same guys that took a break in the middle of the parade +300 years ago and started the whole racing float tradition…

So that means the Doi district’s Kazariyama (the one that stands there looking fancy for 2 weeks) is ALSO on-site, as the Kawabata Arcade is the pride of the Doi Stream. 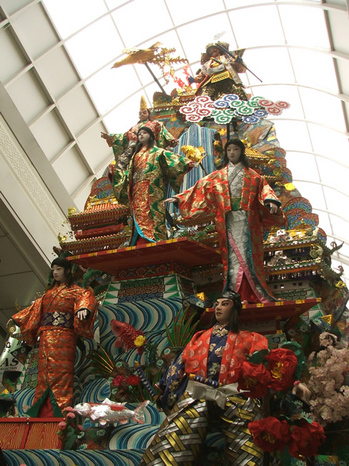 Here it is! These guys are way more done than Gokusho is…
———– 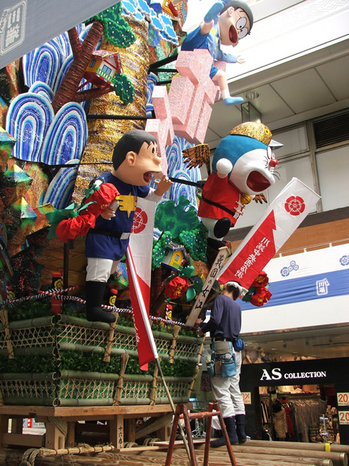 As we’ve just come from the shrine, this must be the “Miokuri” or Farewell side of the Kazariyama. The theme this year is… Doraemon. 🙂
————– 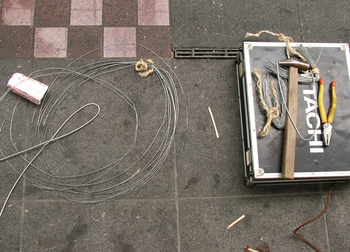 The toolbox on the ground next to the Kazariyama.
——
There were hardly any staff left, though I saw a lot of empty fold-out benches and plastic cups with tea in them.

Good job, guys! you’ve beaten our town to the construction for sure. df

So far Kawabata Arcade has 2 Yamakasa’s, right? The Kazariyama for show and the “special 8th” Kakiyama for running through the arcade. Actually, that’s not all we found there… feast your eyes on this! 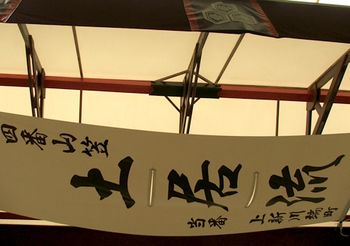 This might not make much sense… it’s on the ceiling.
———-

This spot is a special marker identifying the place where the proper Kakiyama for Doi Stream will be placed once it’s revealed. It’s just about right in between the Special 8th Kakiyama and Doi Stream’s Kazariyama….

My teacher on these subjects tells me that even within the fairly small Stream districts inside Hakata (which itself you can walk the length of in 15-20 minutes), there are even smaller subdivisions. I like to think of them more as blocks. But each of them within each Nagare gets a turn to host the Kakiyama, the one that gets carried in the real race.

As the fancy Kazariyama always stays in the same place every year, somewhere that really stands out and gets lots of foot traffic, it’s a big deal for the local residential bits of Hakata to get to have THE Kakiyama on their doorstep.

But this time around, it’s a part of Kawabata Arcade. That gives them the grand sweep…

That’s it for now! Lots to take in… today we had a quick look through Kushida Shrine too. More on that later!