Tweet
For the next month, it will be my job to report and write about the Yamakasa festival as it passes through this part of town and the company I’m interning at has a lot to do with its promotion.
I began knowing absolutely nothing about this festival, how and when it was run and what exactly happened and why. Let me list the vague impressions I picked up before my first day…

As I’ve come to Fukuoka for the summer, talk with friends and boyfriend naturally came round to summer festivals in Japan (aka Matsuri) and going to see them together.
The Summer Festival season in Japan is August, with a lot of local Matsuri sprinkled around late summer and the Obon holiday. There’s the usual mix of street stands, traditional games (that are all new to me), fireworks and yukata (a light and cheap(er) kimono, originally a pyjama). Though they traditionally center around shrines or temples, many townships (and city wards) will have their own at some time in the year, coloured by local tradition. As I’m leaving in late July though, I was resigned to missing them, until someone mentioned that a  certain festival happened every year in Hakata in mid-July. And not just any festival, the biggest in Fukuoka city.
Great!! I thought. Time to pull out the Yukata, eat my fill of Yakisoba and stroll around town basking in some home-grown culture.

But it’s not that kind of Matsuri…

Although I was all fired up, nobody else seemed to keen on it…
Family in Shingu: “You have to get up at 4 or 5 in the morning.”
Boyfriend’s family in Yakuin: “It’s on every year but I never really go. That’s what the TV is for.”
My boyfriend: “You don’t really wear a yukata to it… it’s not that kind of Matsuri.”
Someone mentioned carrying “Mikoshi” around. This is my first impression of what Mikoshi works like, taken from a round in Ouendan, a DS game that had a fair amount of success in Australia in its untranslated format (starts at about 1.00):

Mikoshi is for a sort of portable shrine. It gets carried around along a certain route at certain special events, like an annual festival. Some places will have a tradition of washing their Mikoshi at a river or lake, while others will build brand new ones every year as part of festivities.

Mikoshi… a man I met in Melbourne said it was serious work, something you trained for all year round.
And last week in an Irish pub in Tenjin, an English teacher into her second year in Fukuoka enlightened me of her experiences.
“I walked in to a street in Hakata last year when they were practising for it, and there were so many butts. Those costumes don’t hide anything. And not just young men, yaknow… really old guys and really young kids too. I didn’t know where to look…” 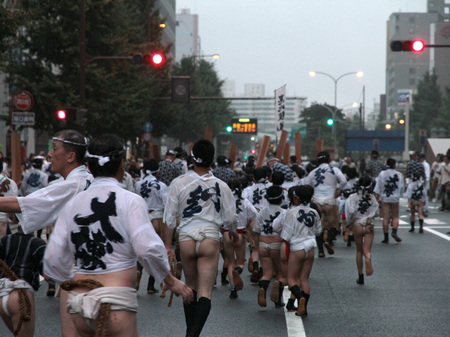 Butt-cheeks, Mikoshi and a 4-am start… this seems like hard work for a festival.
I’m going to go through what this festival is really about as I find out more, and explore some of why things happen they way they do in it.

– Why is it on that early in the morning?
– How many Mikoshi are there? Where do they carry them from & to?
– Is it a race, or a procession or what?
– What shrine & traditions are responsible for this?
– Why do people go to all the effort?
– Even though it’s a huge event that gets televised and many people come from all over Japan to see it, why is it that none of my friends in other parts of Fukuoka seem particularly interested?
So from here on in, I will learn all I can about this area, this festival and what exactly will be going on.
Stay tuned!